Sydney Carter was born in 1874 Enfield, Middlesex, England. He passed away in1945 Harrismith, Orange Free
State. Carter resided in South Africa 1923 where he was a painter of landscapes, generally incorporating trees,
and of portraits. He mainly worked in oil and gouache. He was also a cartoonist.

Carter was a member of the London Sketch Club and the Johannesburg Sketch Club. In 1924 he elected a Fellow
of the Cape Town Society of Artists; 1925 Vice-President of the Orange Free State Society of Arts and Crafts.In
1927 he began teaching at the Witwatersrand Technical College. Illustrated, in a similar style to that of Arthur
Rackham editions of works by authors such as Charles Dickens, Jane Austen and Charlotte Bronte. In SA illustrated
books by Dorothea Fairbridge, including the well-known Skiddle. He travelled extensively in SA. Carter was the
Son of the artist Richard Carter. 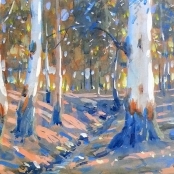 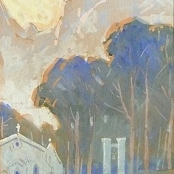