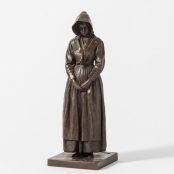 Anton Van Wouw was born in Driebergen, Holland and then moved with his family to Rotterdam
in 1864. In 1874 he studied studying drawing part time at the Rotterdam Academy, but later got
interested in sculpture. In 1890 he moved to Pretoria where he worked for a gunsmith. He also taught
drawing and painting after hours. He later obtained work making decorative mural mouldings as well as
drawing press cartoons and caricatures. He also became friends with Frans Oerder and together they
were commissioned to provide mural landscapes for the reception hall for the opening of the PTA-LM
railway line.

After 10 years in Pretoria he got his first sculpture commission, this was from financier Sammy Marks. It
was to make the monumental statue of Paul Kruger which stands on Church Square in Pretoria. During
his time in the wilderness he developed an admiration for the Boer nation. This had a great influence on
his artistic development and style.

A great deal of his work captured the rugged lifestyle of the Boers in those times. One of his most
notable pieces is the “Women’s Monument” near Bloemfontein. He was also responsible for a less
successful figure of a woman incorporated into the Voortrekker Monument, near Pretoria, a powerful
bust of Genl Christiaan De Wet and the statue of Louis Botha in Durban. Along with that he also
portrayed indigenous people among smaller works. In 1938 he completed his last commission, “Women
and Children” , honoring the role of the women in the Great Trek. This sculpture is located at the base of
the Voortrekker Monument and stands 4.1 metres tall and weighs 2.5 tons.