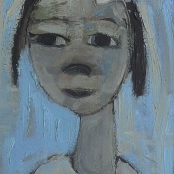 Claerhout was born 1919 Pittem, Belgium. He resided in South Africa from 1946. Frans Claerhout was a self-
taught painter in oil of landscapes and figures, also worked in pastel, ink, pencil, charcoal. A graphic artist
producing monotypes and linocuts,several murals and sculptures. He began painting in 1957, mainly scenes
around the mission stations in the Orange Free State, where he was a Catholic priest. An expressionistic painter
with works characterised by warm colours, impasto and elongated human forms.

His artworks – characterised by their warm colours, thick impasto paint, exaggerated forms, humour and
compassion – were exhibited widely in South Africa, as well as in Belgium, Canada, Germany, the United States
and the United Kingdom.

A much-loved artist and priest, Father Claerhout died in his sleep in July 2006, aged 87.